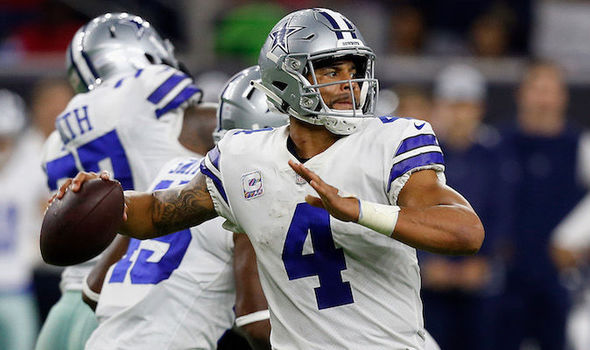 Quarterback: After starting off the season very slow, Dak Prescott has played very well the past two weeks. Prescott has totaled five touchdowns in his past two games, with two of them being on the ground. The Cowboys have put an emphasis on running Prescott more, which not only gives him extra fantasy potential, but also helps him in the passing game. Prescott has a buy this upcoming week, but if you are struggling at the quarterback position and you need someone for the home stretch, Prescott is one of the very few solid options for the rest of the season.

Running Back: Even though Kerryon Johnson is the main running back for the Lions, LeGarrette Blount still gets the majority of the goal line carries. He has scored three touchdowns in the in the past two games, and I expect him to continue to be the go to back for the Lions in goal line situations.

Wide Receiver: Chargers receiver Tyrell Williams has absolutely exploded in the past two weeks. In those games he caught seven passes, for 236 yards, and three touchdowns. Williams seems to have those stretches each season, where he absolutely goes off, and it looks like he is in the middle of one of them. Even though he is also on a buy this week, I would pick him up while he is hot, and see how long he can continue his recent string of strong production.

Tight End: At this point in the season, if you don’t have a solid tight end already rostered, you are going to have a very hard time finding one on the waiver wire. Almost all decent tight ends are rostered, and if you are in desperate need of one, I would recommend you try to trade for one. But this is a waiver wire article, so if you can’t find a trade partner I would claim Mark Andrews. Until Hayden Hurst makes an impact in a game, Andrews is the primary receiving option for the Ravens at tight end. He has scored two touchdowns this season, and has the potential to score more if he continues to get significant snaps alongside Hurst.

If you have any other fantasy questions, Tweet or DM me at gabewilkes1!