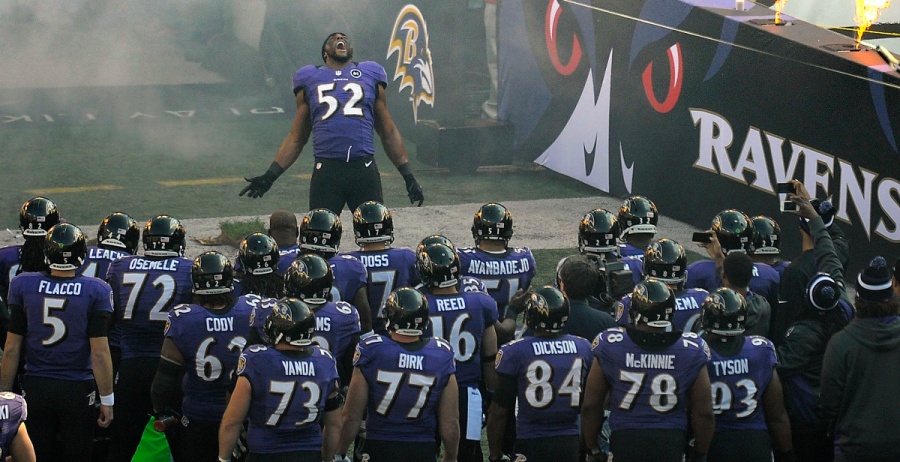 Boys, and Girls, and Babes, it’s nearly here.  214 days after watching a damn Tyler Boyd 4th down conversion end their season, in the bone chilling cold New Year’s Eve night, the Ravens will take the field for their 2018 preseason on Thursday and get to work on washing the blood and bile from the Flock’s collective mouths.  The team has made several changes, which we have recorded throughout the offseason here, and have been building some local and even national buzz about how the team looks.

The HOF Game, being an “extra” preseason game, will allow young players to showcase their stakes for a roster spot, and allow a chance for the Ravens to show some buzz on the national stage, but it is still a preseason game, and fans shouldn’t expect the Ravens performance to be very indicative of how things will go in the regular season.  It’s highly unlikely that the main veterans (Flacco, Suggs, Weddle, Williams, Crabtree, Mosley) will play more than a series, and that’s if they even dress.  Also, teams are usually very vanilla on offense in the preseason, saving their best plays for the regular season when a team won’t have tape on it.  It’s something to be said when the 2008 “0-16” Detroit Lions went 4-0 in the preseason, while the 2008 Ravens went 1-3, ahead of a season when they went to the AFC Championship game.

So for us fans, what are the four biggest things we can hope for on Thursday night?

Did I stress this enough?  The Ravens need to NOT have any major injuries in what is essentially a scrimmage game in any other season.  The past two seasons, the Ravens lost major starters in Training Camp before they even got to Preseason Game 1.  This year, they have been incredibly fortunate that the injury bug has mostly staved off.  A few bottom of the roster players are dealing with longer term injuries, but the major contributors are either healthy and participating, or on track for Week 1 recovering from offseason medical work.  While the Ravens have done some padded (read, LIVE HITTING) practices, training camp work is usually much lighter than a real game.  The main goal of the team on Thursday night is to have all their major players healthy and ready to go into joint practices with the Rams next week

With most of the main veterans likely to get the night off, Thursday provides a prime opportunity for rookies and younger players to get key reps and game action to earn their spots.  Guys like Bradley Bozeman, Orlando Brown Jr, Hayden Hurst, Anthony Averett, and Kenny Young should get key chances to show why the Ravens selected them in April.  But the one guy I want to see the most from is Lamar Jackson.  While I expect RG3 to start the game, I would expect him to exit after a few series and the Ravens to let Lamar loose.  While they don’t want to risk him getting injured, this is a national spotlight opportunity to show why they wanted to trade back into Round 1 and stake some of their future on Jackson as a signal caller for the future.  You can see it in the offensive practices, how the Ravens are clearly looking to run a more creative, dynamic offense that will benefit a player like Jackson.  Thursday would be a really big moment for Lamar to go out and get some work in an NFL game and show if he is ready to be the backup to Joe.  He may struggle, which is fine too, it’s to be expected for any rookie.  But this is the moment for Lamar and the Ravens to let the league see their dynamic draft pick in game action

3. “A Defensive Tribute to Ray Lewis”

In an interview with the press on Monday, Wink Martindale said he “want(s) our defense to play with (Ray Lewis’) effort, his enthusiasm, and his love of the game.”  It was a nice move, to remind the team, and the fans, of why they are even in this game in the first place.  We are here because of Ray Lewis’ induction to the Hall of Fame.  Specifically, it seems we are here with the Chicago Bears because of Lewis and Urlacher both going in as two major forces at the Middle LB position.  So it would be fitting for our defense, which returns ALL it’s starters from last year, to come out and look to make a statement.  I hope to see the defense flying around the field making plays and not missing the plays that allowed the Bears to win in Baltimore last season.  While the offense is usually vanilla in the preseason, the defense usually doesn’t hold much back, so I’d like to see Martindale’s increased aggresiveness and creativity in playcalling on display.

I don’t usually remember much from the HOF Game, seeing as it’s usually not the Ravens and usually not any players I care about playing.  But I do remember this:

This was a fun, exciting moment in what was otherwise a pretty dull game.  The offensive won’t put out any trick plays because they want them to be surprises to opposing defenses in regular season.  But, the Ravens haven’t been opposed to running creative, tricky Special Teams plays in the past.  Specifically, they had a Haruki Nakamura fake punt go for a huge gain in 2010 preseason game vs the Redskins.  There was also video last preseason against the Dolphins where Tucker was pleading his case to try a 72 yard field goal at the end of a half.  The team didn’t go for that, but fans have REALLY wanted to see Tucker go for broke, and this might be the best time to do it, provided he doesn’t injure himself trying or celebrating (see Bill Gramatica injury).  It’d be a fun, exciting way to entertain the national audience, and it wouldn’t hurt anything to miss it, so why not?  If Ravens have a drive stall at or just beyond midfield, let Tuck bang one out.  At worst, he misses and we can stop hearing fans claim he could routinely kick an 80 yard field goal whenever he wanted.  At best….we have a kicker who can kick a 70 yard field goal if he wanted…

While it’s possible none of those four play out the way I hope, Thursday’s game should be a fun showcase of  a team that is generating some buzz in the national spotlight, and provides a nice reprieve for Baltimore sports fans who are lamenting the last place Orioles team.  Football is back, so let’s get to it!