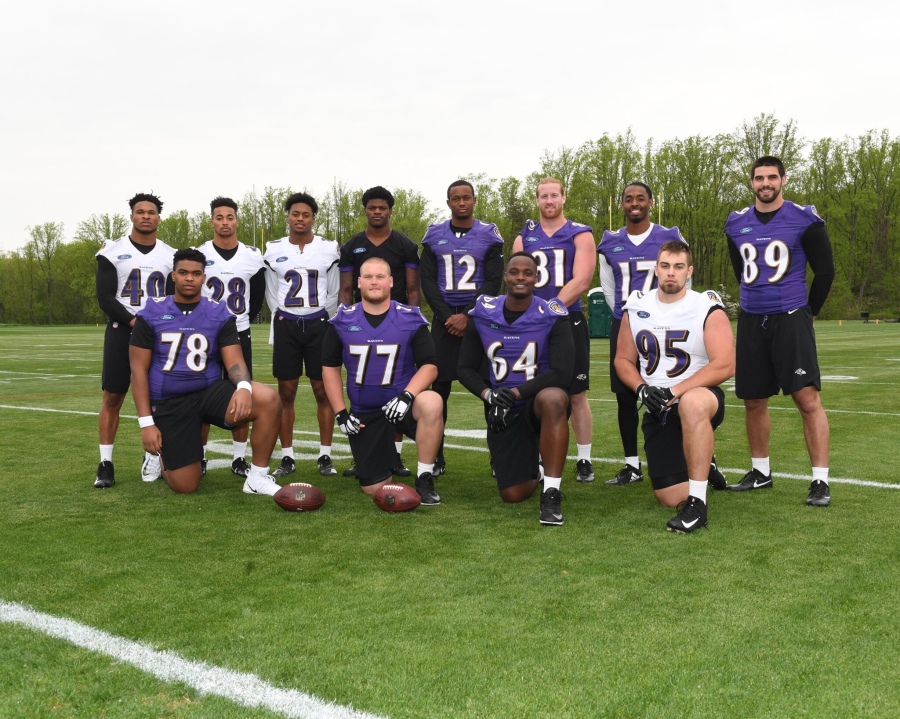 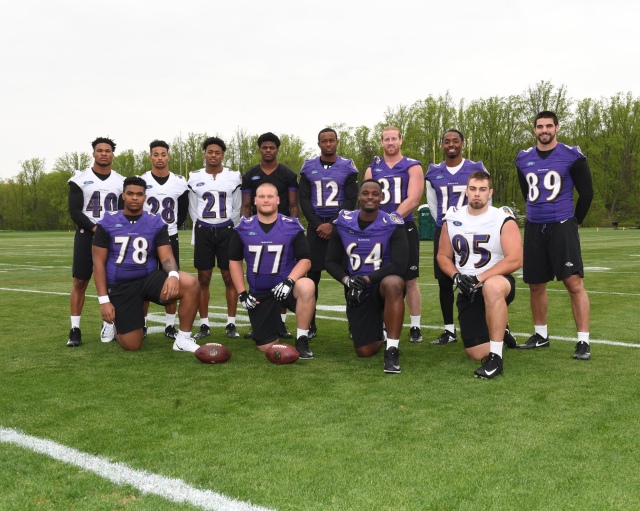 The NFL Draft is expected to yield immediate contributors that pay big dividends. The 2018 NFL Draft was no exception. Fans look at their team’s draft picks with a glimmer of hope and the high expectations that these former collegiate players will help their team take the next step up. Fair or not, fans often expect immediate results and an immediate turn around. The Browns have struggled for years to field a winning football team. Cleveland fans hope that the addition of Baker Mayfield and a slew of other high picks will be enough to help the Browns post its first winning record since 2007. For the New York Giants, the memories of upsetting Tom Brady and the New England Patriots twice in the Super Bowl seem so long ago. With the Giants drafting Sa’quon Barkley, fans of Big Blue are hoping the franchise can be revitalized and get back to the big dance soon.

Ravens fans are certainly used to almost instantaneous production from the team’s rookies. Baltimore certainly has a long list of rookie awards that can attest to that expectation. This year’s draft class, however, should be looked at with a different perception. This year’s draft class certainly stands out for Ravens fans, as the front office finally made a true effort to reinforce an offense that’s largely been ignored the better part of ten years. The draft selections Baltimore used stand out using name value and filling big time needs and that has caused the fan base to look at the future with a certain sense of optimism that seems to have been lacking in recent drafts.

That new found optimism should not cloud a glaring reality: fans must temper their expectations when it comes to the production of this high profile draft class for the Ravens. While the Ravens did draft for need for most of their picks, only one selection truly has a near guaranteed shot at significant playing time in his rookie year. The Ravens filled a major need by taking the first tight end in the draft this year with the selection of Hayden Hurst. Hurst immediately comes in to be the playmaking threat the Ravens have lacked the last few seasons and could quickly become one of quarterback Joe Flacco’s favorite targets. Outside of Hurst, virtually every one of the Ravens picks may be hard pressed to become a starter this season or see regular significant playing time. 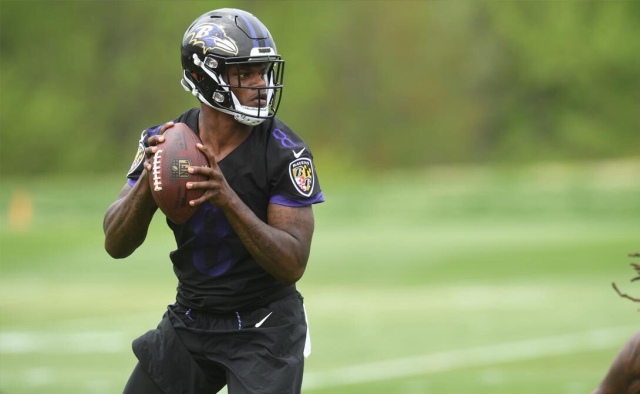 Lamar Jackson was a tremendous value at 32. The Ravens thought so much of his ability and potential that they traded back into the first round (something that has not happened since 2003) just to select the electrifying former Heisman Trophy winner. There is no denying Jackson’s ability, but there is a reason he slide to the final slot of the first round. Many question Jackson’s mechanics and whether he can even be a quarterback at the pro level. Jackson is a quarterback, there is no denying that, and he landed in a position that benefits him the most. Jackson will get to sit and learn behind veteran Joe Flacco. Flacco’s cool and calm approach to literally any situation has rubbed many fans the wrong way, as they want to see a passionate fire from their quarterback reminiscent of Ray Lewis. However, Flacco never wavered under pressure, and that could be a great technique for the often-scrutinize Lamar Jackson to learn when he suits up for his first NFL game. Every throw Jackson makes will be put under the microscope, and inheriting Flacco’s calm approach may do wonders for the Louisville product. Jackson will have time to develop his mechanics and he has the coaching staff to help him do it, but it may take at least a year before Jackson to learn the ways of a winning NFL quarterback. The Ravens must ignore the calls for a quarterback change that are bound to happen after Joe throws his first interception and give Jackson the time he’ll need to develop. 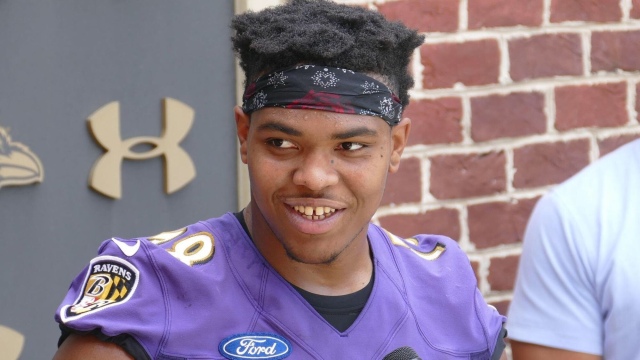 One of the feel good, sentimental moments of the draft (outside of Ryan Shazier’s incredible, inspiring moment) was the Ravens selection of Orlando Brown Jr out of Oklahoma. Brown’s father played with the Ravens for a total of seven seasons, making Brown Jr a legacy. It wasn’t just Brown’s bloodlines that made the Ravens use a third round pick on the offensive tackle out of Oklahoma. Zeus’s physical size (6’8, 345 lbs) and ability to pave the way on Baker Mayfield’s blindside, combined with a glaring need on the right end of the Ravens offensive line, made him a solid pick for Baltimore. However, Orlando Brown Jr’s combine was one of the worst showings in its history. Brown looked embarrassingly uninterested in the drills and his stock tumbled as a result. Poor workouts and questionable a questionable work ethic aren’t the only things working against Brown. Oklahoma’s offense was predicated on quick strikes and fast moving plays. To get a head start on the sudden movements required in this offense, Brown would have to stand in a 2-point stance, rather than the NFL’s more traditional 3-point stance for offensive lineman. Brown may have to learn a whole new skill and get adapted to his quarterback taking a five to seven step drop back, meaning Brown will have to sustain his blocks for even longer. While it would be great if Brown could step in and start on the right side immediately, there may be a learning curve there in regards to technique and work ethic. 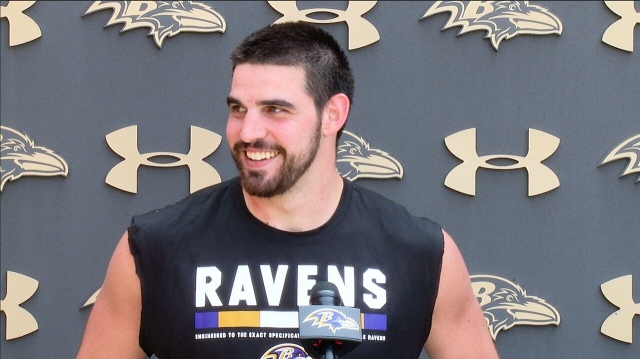 Brown’s teammate at Oklahoma and fellow third round pick, Mark Andrews, was also seen as excellent value at the spot he went. Andrews has great size (6’5, 255 lbs), hands and athleticism for the position. In the NFL, no matter how athletic the tight end, he will be asked to block and that is not something Andrews did a lot of in college. Andrews was essentially used as a glorified slot receiver for Baker Mayfield and rarely had to block. At the pro level, Andrews simply cannot stand in and not block. Tight ends line up to help in the ground game. If a tight end that simply can’t block goes into the game, the defense will be tipped off to one of two outcomes: the play will either be a pass, most likely targeting said tight end, or a run play in the opposite direction the tight end is lined up. Blocking NFL defenders is not a skill learned overnight. Andrews has all the skill in the world and should team with Hurst to become a dynamic tandem for the Ravens in time, but until he can become a competent blocker, don’t expect to see Andrews on the field too often in his rookie season.

The Ravens also indulged fans by drafting two highly interesting receivers in Jaleel Scott out of New Mexico State and Jordan Lasley out of UCLA. Scott brings size (6’5, 220 lbs) and youthful ability to the Ravens receiving core. What Scott lacks in speed, he makes up for with his ability to go up and get lobs and make the occasional acrobatic circus catch. There are bigger knocks on Scott than just his speed and those are his hands and his experience. Scott would seem to lose focus down the stretch and drop easy passes. He only has one year of starting experience. Lasley’s explosive talent jumps off the screen when you watch him. As Josh Rosen’s favorite target, Lasley but up massive numbers. He ran into trouble with the law off the field however and that caused some to balk at drafting him too high. Lasley also boasts a terrible drop rate during his time at UCLA. Both of these draft choices sit at the bottom of the depth chart of a revamped Baltimore receiving core, but that may be a blessing in disguise. Scott and Lasley have tremendous potential but both need some coaching. With so many veterans ahead of them, these two rookie wide outs will have time to develop their skills without the pressures of receiver-starved fan base watching their every move. Michael Crabtree, Willie Snead and Jaron Brown appear to be temporary solutions with each of their futures up in the air season by season and maybe by next season, the two rookie receivers will be ready to step into bigger roles.

The Ravens had one of the best draft classes this season. They struck gold in the early, middle and late rounds of the draft. The future for Baltimore is bright as long as they give their selections due time to adjust to the NFL. The Ravens did well to patch up some of their holes on offense so that not too much pressure is placed on their rookies. High expectations for rookies coming into the league are common place now, but fans should learn to be patient with this class. The Ravens have done a solid job of building their offense of the future. Now it’s time to sit back and patiently wait to reap the rewards of a promising draft class.