Each April, the night after the drama and spotlight of the 1st round is over, the Front Office goes back to their board and starts cleaning and re-stacking it.  For the Ravens, they can pretty much clear the entire QB slate off now, as it’s next to zero chance they take another QB in this draft with Flacco and Jackson on the roster.  They also will take a long look at the top players they expected to go in the 1st round who remain there when Day 2 begins, and start thinking about who might be there when they make their next pick.

Here are 10 Offensive and 10 Defensive players they might be thinking about while 32 picks go by before their next pick:

Sutton was a probable 1st round pick, but his small school stature and disappearance in some games led him to slip to Day 2.  HUGE WR.

Kirk is a classic slot WR, played in a bigger school than Sutton, and should be a fine NFL WR prospect.

Daniels had been most people’s top Center in this draft, but lasted to 2nd round.  His strength and ability to sustain blocks in the run game should get him in Day 2 for sure.

Williams was the 3rd ranked OT on the board behind McGlinchey and Miller.  Strong, but size might translate better to Guard.  Probably be the best Exterior Offensive Lineman left 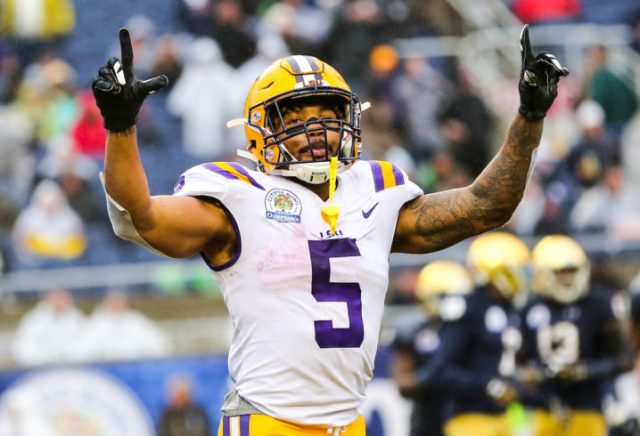 Guice was a RB that visited the Ravens in the leadup to the draft, and when healthy looked like a strong runner.  While RB isn’t as strong a need as WR or RT or C, if a very strong RB is available to pair with Lamar Jackson, the Ravens have to consider taking one.

The son of the late Ravens legend Orlando Brown, Brown Jr. is notable for having a very bad Combine where he posted a low bench press, a slow 40 time, and was yelled at by coaches doing drills for “loafing”.  Despite these red flags, Brown Jr. had a much better Pro Day and his tape from his college career shows enough promise to warrant consideration in Round 2.

I’ll have to confess, this one is one where I personally pumped him up my draft board.  Miller is a smaller WR, 5’11” in size, and as a result it’s become a bit of a knock on him.  But Miller wrote a letter to all 32 NFL Teams, describing why he feels he is the best WR in the 2018 draft class and how his size shouldn’t be a knock on him.  I love that fire and chip to prove people wrong, reminds me of another shorter Ravens WR, who wore number 89…He’s a slot receiver, but produced well for Memphis and should be in that group of WRs to go between Round 2 and 3.

While it’s not the DJ WR I truly wanted, DJ Chark is a very strong option that should go in Round 2.  Chark had the best Vertical Leap and 40 time for all WRs, and posted 874 yards for LSU last year.  His draft stock was affected by rough QB play at LSU, but he should be among the top WRs in Day 2. 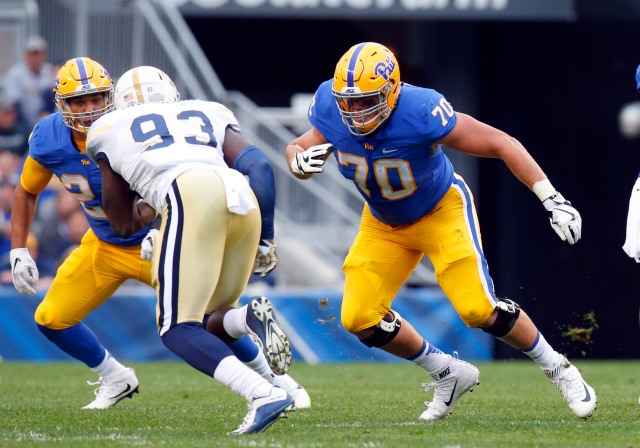 O’Neill is a name I hadn’t seen mentioned much in the 1st round mocks, but he has great size and had the best 3-cone drill of ANY OL in the Combine.  He played RT for his 2nd and 3rd year at Pitt, after being converted from WR.  In his final year, he switched to LT and held his own.

Chubb’s backfield mate went in the first round, but he is a strong runner, and was used less as a pass catcher.  While never really a 1st round consideration, Chubb had a good 40 time for his size and tied Saquon Barkley for bench presses by a RB in 2018 Combine. 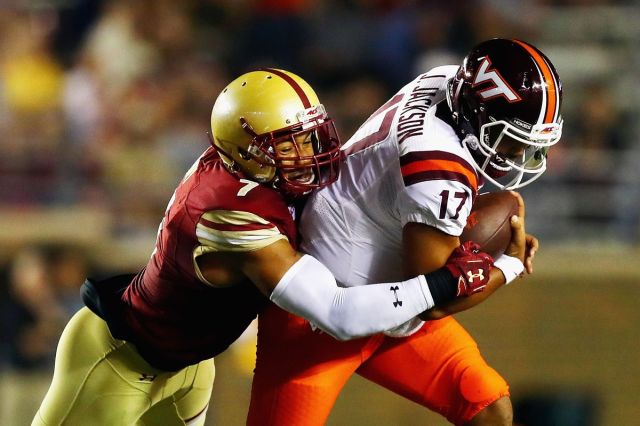 Landry is a guy that was considered with the Ravens pick at 16, 22, and even 25.  He is clearly the biggest talent on the board remaining, a very strong edge LB that should play better in a 3-4.  He didn’t have an impressive senior year, but should find a spot early in Day 2.

Hubbard is a bit bigger than Landry, and had a better senior season.  His Pro Day, however, was not quite as strong and he slipped to the 2nd round.  Landry might be viewed as the higher ceiling LB, but Hubbard is probably the more solid pick. 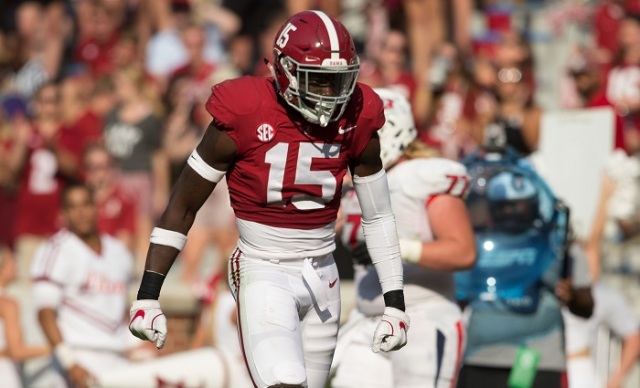 Harrison is less of the typical free safety that his Defensive Backfield Minkah Fitzpatrick was, but he showed to be a strong run defender and could be a good option to groom in the Ravens restocked defense. 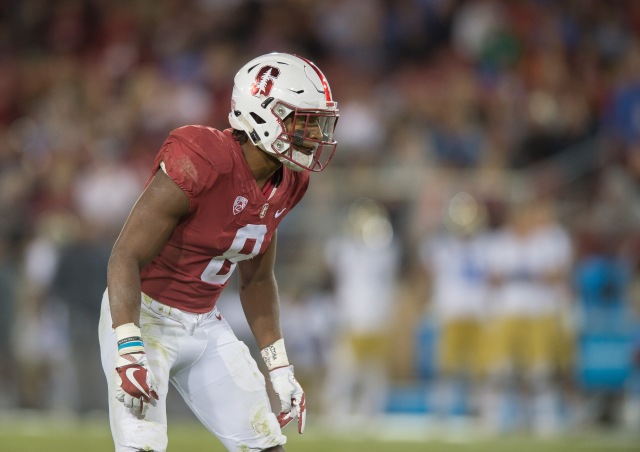 Reid could play either free or strong safety, had a very good 40 time, and while he doesn’t exceed in any one particular area, he does very well all around in duties as a Safety.

Leonard has a knack for making plays behind the line of scrimmage, racked up 113 tackles last year, and really flew around the field.  While he comes from a small school, he impressed at the Senior Bowl and is the best potential ILB left.

Jefferson is a bigger, and yet faster, LB than Leonard.  The biggest knock on him was questioning his commitment to football.  Given his big school background, he should get drafted Day 2. 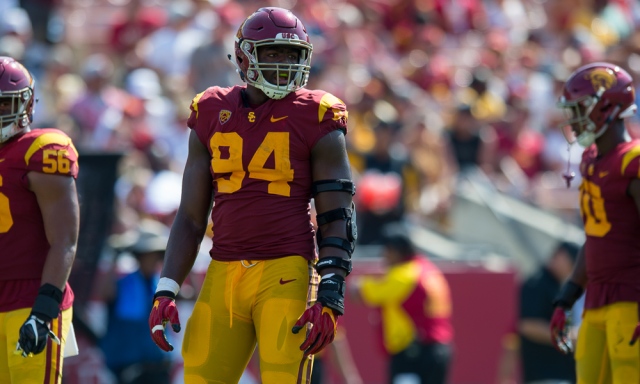 While Defensive Line isn’t a strong need for Ravens, Green is a good pass rusher whose size could either lead him to play as a 3-4 DE or a pass rushing LB.

Jackson will be much higher on other team’s boards, but the Ravens don’t have as strong a need for a CB anymore.  Jackson is a solid 1st round prospect with his only big knock being an underwhelming Combine.

A dangerous LB with many off-field concerns, this is a pick where Ozzie needs to weigh if the character issues outweigh a 1st round talent as a pass rusher.

Jewell had a very impressive 136 tackles in 2017, but has injury concerns.  If Ravens can develop Jewell, he can be a high ceiling ILB to play next to Mosely.

So, here’s hoping 1 or 2 of these guys are able to “Play Like a Raven” when the team takes the field in September.