Good morning! It’s Draft Day! Rumors are swirling, phones are ringing and amateur bloggers are warming up their fingers for this evening’s festivities. I have put together an argument for the Ravens to ignore the wide receivers that might fall to 16th pick.

This offseason, the Ravens made strategic moves to shore up a weak point on their offense, despite being flush against the Salary Cap. The moves make taking a first-round wide receiver an ever more of a far-fetched scenario.

Ok, first of all, calm down. The Ravens completely revamped our wide receiver corps by adding a big, chain-moving, veteran in Crabtree, a quick, take the top off bounce-back story in Brown and a sure-handed slot weapon in Snead. That is not to mention Grey Cup MVP DeVoir Posey, 2017 preseason standout Tim White, yet-untested UDFA Quincy Adeboyejo, high upside Chris Moore, and 2015 first-round pick Breshad Perriman.

Beyond the talent we already have at wide receiver, let’s take a moment to look at the draft’s presumed top six wide receivers according to sports media around the nation.

1. Calvin Ridley, Alabama – The presumed No. 1 wide receiver in this year’s draft, Ridley has a solid mix of NFL qualities to make him a solid number 2 receiver. I am concerned with his overall lack of size (189 pounds) and separating ability. At the NFL combine, Ridley had a vertical of 30 inches, which was one of the lowest of all wide receivers.

2. Christian Kirk, Texas A&M – Perhaps the most prototypical slot receiver in this draft, at 5-11, Kirk will be a dynamite possession-slot guy who can hop in for returner duties. The Ravens brought Willie Snead IV in to serve this role but will still look to add a returner later in the draft.

3. Courtland Sutton, Southern Methodist University – At 6-4, Sutton embodies the tall receiver that could provide matchup problems with corners and safeties. He put up decent numbers at SMU, but still lacks the weight and explosiveness to make him an ideal No. 1 receiver. Sutton ran a 4.5 second 40, one of the slowest at the combine. Sutton did have the third highest vertical jump.

4. D.J. Chark, Louisiana State University – It would be a stretch for the Ravens to take Chark in the first round. Although he has intangibles that make him a good NFL prospect, Chark suffered from inconsistent quarterback play at LSU. Chark played well at the Senior Bowl, but still won’t crack day one of the draft and if he does, some team would have really reached for an unproven wide receiver. Not every LSU product that had a sub-par quarterback is going to be an Odell-Beckham or Landry.

5. James Washington, Oklahoma State University – Coming out of pass-happy Oklahoma State, Washington put up 1,549 yards in his 2017 season. Washington is a take-the-top-off receiver who can get open down field. Like many other receivers in this draft, he would be a good addition to the Ravens in the later rounds and would be a downfield threat for Flacco, but not one that would go much higher than the middle rounds.

6. D. J. Moore, Maryland – Perhaps my favorite wide receiver in the draft, Moore has good size, speed and hands to be a solid No. 2 wide receiver. Moore also suffered from inconsistent quarterback play throughout his time with the Terrapins but showed a lot of promise during the senior bowl and combine. Not a day-one starter, Moore could quickly develop into the best wide receiver in this class. That being said, I still wouldn’t take him in the first round. The Ravens have too many other holes to fill. 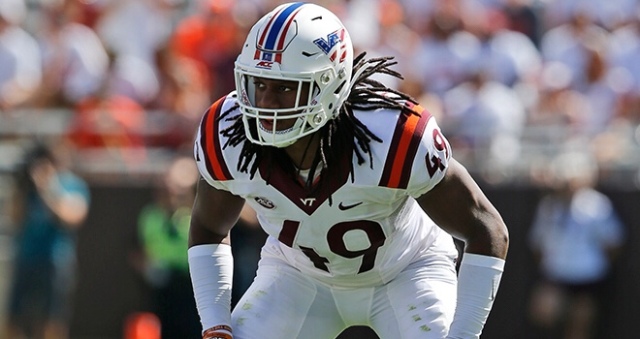 The six players listed above are sub-par when compared to first-round talent peers in over the last few years (except for 2017, those guys were absolute bums. Looking at you, John Ross). This offseason has underscored the sentiment among general managers regarding this class and was extensively highlighted by the absurd contracts that players like Sammy Watkins ($48M with $30M guaranteed) and Jarvis Landry ($75M with $34M guaranteed) were given.

The Ravens would benefit from filling other glaring deficiencies in the early rounds. Positions like Inside Linebacker, Offensive Line, Tight End and Safety, should be higher on our to-get list, provided quality players are still on the board.

To circle back around, nothing would happen if the Ravens took any other “need” in the first round or even traded back and had two second (or third) round picks. With our team poised to make another playoff push, it would be nice for the Raven faithful to have a little peek into what Ozzie’s last draft will provide. I hope we draft another Alabama player, I just don’t think it should be a wide receiver.