Ahead of the 2018 NFL draft, Ozzie Newsome and Eric DeCosta gave Ravens fans exactly what they had been clamoring for since the 2017 season ended. No, it’s not a new quarterback or a splashy free agency signing, but it’s almost as good – we’re getting a completely redone Wide Receiver Corps. This blog will not explore the clusterf*ck that is our tight end position, so I don’t want to hear your complaints, later.

The alleged departures of Michael Campanaro, Mike Wallace, Jeremy Maclin and Breshad Perriman set the tone for the 2018-19 offseason campaign. (I was informed by my editor that Breshad Perriman will still, unfortunately, be with the Ravens in 2018. I dropped the ball on this one; sorry to ruin the elation you probably felt reading that)

Throughout the 2018 offseason the Ravens have continued to be in the spotlight regarding this absurdly intense veteran receiver market and the equally as atrocious payouts. Without the gaudy cap space some teams had, (looking at you Cleveland), the Ravens have had to assume a strategic “second choice” posture in the market.

Let’s take a peek under the hood and see who the Ravens “new-look” wide receiver corps is going in to the 2018-19 season. 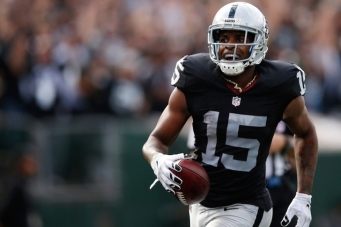 Michael Crabtree – If you told me at the end of super bowl XLVII that Crabtree would play for the Ravens, I would have laughed in your face. Well, the joke’s on me as he joins us from Oakland. Crabtree had a decent tenure in Oakland: 232 receptions and 2,543 yards over his three year tenure with Oakland. The majority of those yards came in 2016. It will be important for him and Joe to get comfortable with each other, quickly, or year one of the wide receiver remix will be a disappointment. I, for one, am looking forward to more Aquib Talib drama. Man, 2012 was fun.

John Brown – “Smokey” joins us from Arizona where he put up 173 receptions and 2,515 yards over four years with most of that production coming in 2015. There are some concerns, however, about his ability to stay healthy. In 2017 Brown suffered multiple injuries but still played in 10 games but only managed 21 catches for 299 yards. Hopefully his diagnosis as a sickle cell trait carrier will not affect his on-field performance. According to an ESPN article from earlier in 2018, “Carriers of this trait are more likely to experience muscle breakdown when doing intense exercise than those who don’t have it. But Brown believes the bigger issue relating to his health was a cyst on his spine, which caused so much pain and fatigue in his legs that he struggled to pick up his daughter. He had it drained after the 2016.” As with any comeback story, I will wait until reports surface from training camp before passing judgement on Brown, I suggest you do too.

Willie Snead IV – After being drafted out of Ball [so hard] State in 2015, Willie put up 1,971 yards during his three-year stint as a Saint, according to Pro Football Reference. The majority of that production came in 2015 and 2016. Willie was limited in 2017 and only appeared in 11 games. Snead, 25, caught 149 of 221 passes during his tenure in New Orleans and adds some much needed youth and reliability to the Ravens Wide Receiver Corps.

DeVier Posey – Akin to the White Walkers in Game of Thrones, Posey’s 2017 season ended with him poised to return to the fertile lands he once knew. Months after winning the Grey Cup MVP (Canada’s Super Bowl, c’mon have some culture), Posey returns to the NFL as a member of the [Three Eyed] Ravens. Posey put up good numbers for his short time in Toronto, 65 receptions for 905 yards. The vast majority of those numbers came in 2017 and probably helped land him on the Ravens radar. The former Buckeye bounced around the NFL for a few years before journeying to Toronto where he found recent success. It will be interesting to see if Posey can turn those CFL numbers in to a great NFL comeback story.

Chris Moore – The first of the Ravens Veterans to be mentioned might be last vestige of the old wide receiver corps still worth keeping on the team. He isn’t too old, has put up alright numbers ( 18 catches, 248 yards) for a WR 4-5, and is only 24 at the time of this article’s writing. He has a big upside and hopefully he can tap into some of what made him a good prospect out of Cincinnati.

Breshad Perriman – You know, it’s a damn shame that I have to call Perriman a veteran in any regard. I do it begrudgingly. This is a make-or-break year for Perriman. Maybe the CFL, Arena League or XFL could use him, but so far he has not played at an NFL level. The failed first round experiment on the last gasp of his rookie deal and is, yet again, given one more year to see if he can tap in to any of the potential someone saw in him in 2014. I don’t even want to look up his stats. You know them as well as I do. Unremarkable.

Update – 4/24/18: According to an ESPN article, the Ravens are not expected to exercise Perriman’s fifth year option and could potentially cut him as early as June 1 or as late as July, which would save $1.6 Million in cap space. However the X factor is Harbaugh’s die-hard player loyalty. I would be surprised if Perriman didn’t at least see a few weeks of camp. Last year, Harbaugh was frustrated with Perriman’s inability to reproduce his practice field play in his on-field, in-game, play. Perriman’s struggles could be mental and that can be the worst obstacle of all.

Tim White – After flashing in pre-season White had the rest of his 2017 campaign cut short with a hand injury. I am expecting him to come back with a vengeance. He could be the next UDFA diamond added to the Ravens growing list. I am glad we kept him on the roster and we’ll have to see what he can do in the regular season.

Quincy Adeboyejo – Adeboyejo spent the season relegated to the bottom of the wide receiver depth chart out of desperation. I am hoping that he can have a breakout year and is a fun follow on twitter (@QuincyA18).

All in all, I am pretty psyched for this upcoming season. It will be interesting to see how this new-look wide receiver corps meshes and how our offense matures. There are three major things that need to happen in order for this positional update to be successful.

Asking Flacco to put in a little extra effort is exactly what this team needs. We have seen that a quarterback cannot miss an entire offseason and expect to be on the same page with his wide receivers. While the Maclin Experiment was disappointing, he flashed some brilliance. We’re left to wonder if Flacco had stayed healthy through the offseason and if he had time to coalesce more with Maclin and the rest of the receivers, if that would have made a difference. Lets eliminate the “Ifs” next season.

We have run a modified, west coast, zone blocking, play action, deep ball offense ever since Kubiak revamped our offense. The lynchpin to this style of play is the run game. Since Kubs we have had some decent backs, but we have never replaced Ray Rice. With the newest addition, Alex Collins, we have a steady workhorse who seemed willing to shift his style to limit fumbles. Hopefully, he can take the next step in 2018 and become our premier back that allows us to play with a lead and hold it with airtight defense, as is the Raven way.

Watching the Ravens play last year was a mix of excitement and extreme boredom. We were not an exciting team to watch. That doesn’t bother me as long as we are filling up the win column (don’t @ me). What I want to see next season is a willingness to take calculated risks and surprise opponents with a departure from run, run, play action, punt. We rebuilt our wide receiver corps, so let’s take them out for a ride. Let them play fast and loose. Maybe Joe will even crack a smile.