April 19th is here, and we finally have the 2018 NFL schedules. Here is one man’s reaction, and far too early prediction, after some thought on the matter. 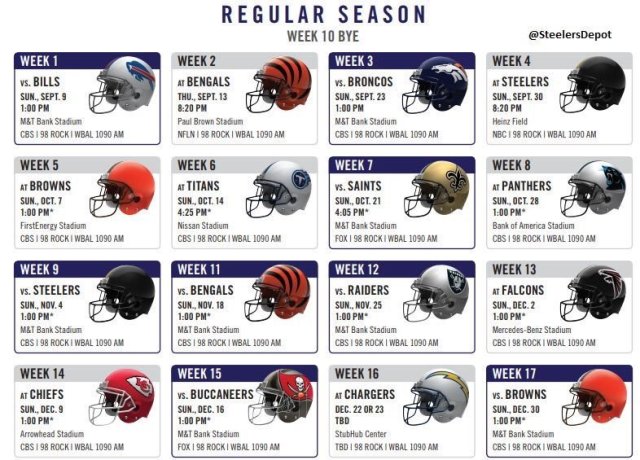 This isn’t outside the realm of possibility. The season starts rough, but ends relatively easily. The Ravens face 7 playoff teams throughout the year, but begin, and end, with teams that will likely be starting rookie signal callers. I expect a loss apiece to Pittsburgh, Atlanta, and Carolina, along with wins against Cleveland, a win against New Orleans, and a win at home against Pittsburgh.

For the first time in what feels like forever, the Ravens don’t open, or close, the season against Cincinnati, which means fans can breathe a sigh of relief. However, they do finish against that other team in Ohio. (If we get knocked out of contention by the Browns, I’m breaking things. I promise.)

A string of road games could prove tough, but as long as the team remains relatively healthy, they should come out of that stretch 2-1. A Week 10 bye is a blessing, as it will give a week to rest, and finish the season strong. I’d expect 10-6 good enough to land at least a Wild Card spot, ending the 3 year drought in Baltimore.

What are your way too early predictions for the 2018 Ravens season? Sound off and let us know!