Ladies and gentlemen of the Ravens Flock, these articles by myself and Phil are going to change slightly. Instead of doing our favorite first round prospects, we will instead be going over our favorite prospects that the Ravens have a realistic chance to get in any round in the draft. It gives us more options, and also may give an insight into some lesser known players. This time around, we’ll be exploring running back options. So, let’s get into it.

The running back position in Baltimore is pretty solid – Alex Collins came out of nowhere (to most people), Buck Allen showed a marked improvement in 2017, and Kenneth Dixon is returning in 2018 after a good rookie season. However, I’m just going to go ahead and say it – there’s room for another good running back to help share the load. I think Bo Scarborough could be that guy.

Bo is a very powerful runner. He has the ability to take a solid hit, and keep driving the play forward, both with his legs, and with his size. Tackle him low, he digs in for a few more yards. Tackle him high, and it almost always doesn’t end well for the defensive player. When he played against the upper echelon of college teams last season (Auburn, Florida, Clemson, etc), he bordered on dominant. He uses his length and downhill speed to absolutely beat on defenses, breaking them down so he can get the chunk play later in the game. The guy can do it all (almost; more on that later) – make reads, block blitzes, short yardage touchdowns, and has the innate ability to fall forward on almost every play. You combine his powerful run style with the quickness and shiftiness of Collins, and it will keep teams guessing on every run play. He’d be a great support piece for Joe Flacco – a guy you don’t want throwing more than 30-35 times a game, and would help keep Collins fresh throughout the season. Sidenote – Bo himself is still fresh. A lot of tread left on the tires, due to Alabama using a back-by-committee approach.

Now, the downside. First and foremost, his injury history is a concern, especially in the hard-hitting AFC North. He’s had multiple injuries, dating back to high school. Being a part-time back would help alleviate some of those concerns, but he would still have to learn how to be hit in order to play entire continuous seasons. He has a large frame, and runs more upright than the ideal back, which leads back to the injury concerns. It’s easier to hit a target of his size, and it’s not like he has top-notch second level skills – linebackers WILL hit him. He’s not a very ‘bursty’ guy, and requires some room to get up to speed, but once he does, he’s a freight train. Make no mistake – this is a poor man’s Derrick Henry, and if he’s available late Day 3, I see no reason why the Ravens shouldn’t take a flier on him. 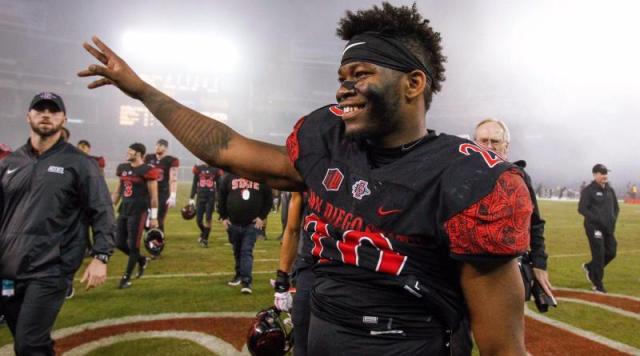 Man I REALLY wanted Scarborough but Chibs nabbed him first. Oh well. I guess I’ll just have to pick my other man crush at the position.

Not to mention Penny also had seven career kick return touchdowns during his career at San Diego State, a spot the Ravens also need to fill with the departure of Michael Campanaro.

The biggest knock on Rashaad Penny is his competition or lack thereof. He didn’t play in the SEC or Big Ten so teams might attribute his production to playing subpar talent. We saw what Kareem Hunt did in his rookie season. If a player is talented enough he’s going to produce no matter what the competition is. Just look at Cardinals running back David Johnson, a player out of Northern Iowa that slipped to the 3rd round just like Hunt did.

Penny offers big-play ability, elite speed, and I believe his receiving skills will be better utilized on the pro level. The Ravens could land him in the 3rd or 4th round and I believe he can do more on the field than an old school running back like Scarborough would for this team.