If we’re being honest, it’s been rough time to be a Baltimore Ravens fan, over the past few seasons. Last season, our postseason hopes ended on a failed coverage on 4th and 12 against the Bengals in Week 17. In 2016, Antonio Brown shattered our dreams with a gritty touchdown in the final seconds. 2015 was filled with injuries and shoddy play on both sides of the ball. The front office repeatedly tried band-aids and creativity to get back to the playoffs, to no avail.

This off-season, the promise was made by General Manager Ozzie Newsome to completely change the wide receiver group, which was the position widely agreed to be most in need of an overhaul. The trio of Mike Wallace, Jeremy Maclin, and Breshad Perriman was mostly miserable, while Chris Moore and Michael Campanaro showed flashes here and there, and we never got to see Tim White or Quincy Adeboyejo in meaningful snaps. Thus far, the Ravens have signed former Raiders WR Michael Crabtree to a 3 year, $21M contract, as well as inking former Cardinals speedster John Brown to a 1 year prove it deal worth $5M ($6.5 with incentives). They’ve had visits with RFA WRs Willie Snead (of the Saints) and Cameron Meredith (of the Bears), while showing interest in former Jaguars WR Allen Hurns. Ozzie looks to be making good on his promise to ‘leave no stone unturned’ in revamping the room.

This seems to have sparked hope in Ravens fans, and well it should. Crabtree has made our secondary look foolish in the past, and is consistently productive. If Brown can recapture some of his 2015 season, in which he was phenomenal, he can provide a much needed deep threat. Snead would be an upgrade over Moore, and Meredith is a massive 6’3″, a sizable threat that Baltimore does not currently boast. Even Hurns carries a nasty, no fear approach over the middle, though he’s not my favorite option. However, Ravens fans, and I say this with as much love as my dark soul can muster, are a very ‘extreme spectrum’ bunch, and some have jumped from depression to homerism. Let me explain.

In the days since the Ravens signed Crabtree and Brown, I’ve noticed a paradigm shift in the Ravens Flock, from people assuming that enough has been done on offense to contend, to people thinking that Crabtree and Brown will bring out the best in Breshad ‘Ghost’ Perriman. Neither one of these thought processes is true, or close to the truth.

Michael Crabtree was a much-needed pickup for Baltimore – savvy, even, considering the team-friendly deal that he was signed to, with a way out after the first and second year. A force in the red zone, steady hands and a spitfire attitude, something that has been missing from the Ravens for a few seasons now, since Steve Smith retired. Ravens fans were excited (myself included) about the signing, and for good reason, but let’s call him what he is – a very solid number two receiver in the twilight of his career. Yes, he has made our lives miserable when we’ve faced him. Yes, he is an upgrade over every pass catcher that the Ravens fielded last season. However, he is not ‘the answer’.

John ‘Smokey’ Brown is a very underrated wideout (more on that here), who can stretch the field, runs through defenders (impressive for a guy his size), and can also make his presence known in the end zone. He was signed to, again, a very team-friendly contract – Ravens fans that knew his potential (see the 2015 NFL season) loved the signing. However, again, not ‘the answer’.

So what is the answer? When will the Ravens have done enough to be ‘ready’ on the offensive side of the ball? That is more complicated than a few simple sentences. So let’s dig into it, and I’ll try to be as clear as possible, to temper expectations based on how the Ravens offense sits right now.

That doesn’t exactly inspire confidence, when you see it on paper. As you can see, the two new additions don’t exactly boost the offense as much as some may think. 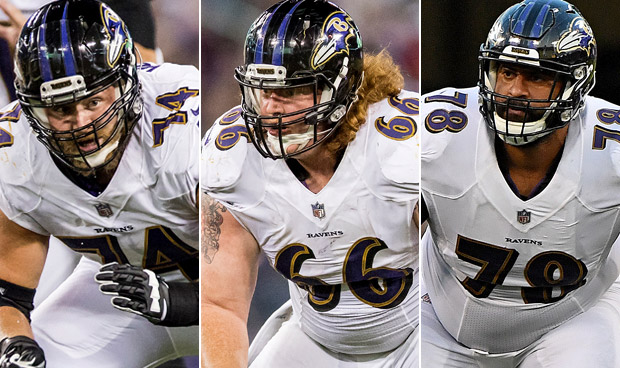 The offensive line is in flux, to start with. The loss of Ryan Jensen puts the center position in question, with no clear-cut candidate to take his place (yes, I put Skura there, but he’s not as cerebral as I would like). Alex Lewis and Marshal Yanda are returning from season-ending injuries, and Lewis is nothing more than a stop-gap at a position that Austin Howard (currently a free agent) played well at last season.

Joe Flacco is the quarterback until the 2019 season concludes, at least. Behind him, there’s… nobody? Unless you count Josh Woodrum, who is on the practice squad. Woodrum flashed at times in the preseason, but couldn’t beat out Ryan Mallett, career backup, for the bench position. Look for the Ravens to draft Flacco’s heir apparent this season (Mike White). 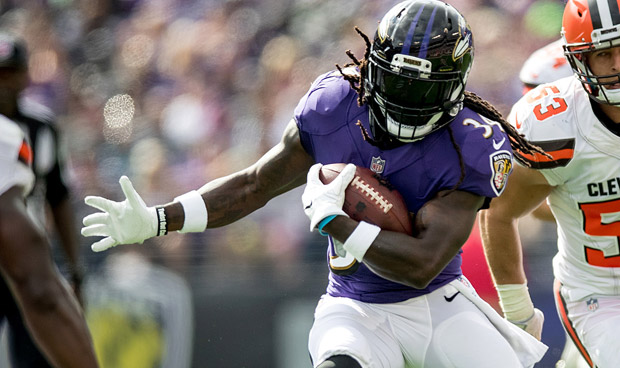 Alex Collins. Buck Allen. Kenneth Dixon. Patrick Ricard at fullback. Not bad. Still need a change of pace (see: power) running back – somebody like a LeGarrette Blount. Collins does well dancing around with his unique running style, but needs to improve between the tackles. Allen is very up-and-down as a pass-catching back, and Dixon has been either suspended or injured, or both, since he gave us hope as a rookie (led the league in touches per missed tackle, forcing one once for every 3.4 touches). But, both myself and the Ravens seem to have lost some faith in the young RB, and there’s room for improvement in the Baltimore backfield.

Michael Crabtree: Very solid number two, proven pass catcher. Chris Moore: Showed improvement as the 2017 campaign wore on, made some circus catches, had some bad drops, good number three receiver. John Brown: versatile speedster, has had a litany of injury issues, even having his tooth listed on the injury report, at one point. Has a high upside, but is mostly boom-or-bust. Breshad Perriman: Former first round pick that showed enough flashes to be a number three receiver his second year (sat out his entire rookie year with an injury), then turned around and was responsible for more interception yards than receiving yards in year three. Tim White: Another one that showed flashes in preseason, but sat out with an injury all season. DeVier Posey: Short stint in the NFL that ended with injuries. Went to the CFL, and was the Grey Cup MVP last season. Quincy Adeboyejo: Once again, sat out most of the season with an injury. This means that we can add 2-3 receivers and still might not have anything more than a slightly-above-average receiving corps.

Nick Boyle is a blocking tight end that has more athleticism than he’s given credit for, and catches nearly everything that’s thrown in his direction. But, he’s misused, underused, and therefore underappreciated/valued. Maxx Williams seems like he’s coming off of his 40th injury in his short career, and Darren Waller can’t seem to stay on the field for other reasons, though he showed flashes of being a good pass-catching option. The Ravens missed out on a couple pass-catching TEs in free agency, and need to address this hole early in the draft. (In other/related news, free agent TE Crockett Gillmore, also coming off of injury, is gaining weight for his transition to offensive line.)

Hopefully this has dulled the purple tint of some people’s glasses, and given them new perspective. Every single position on offense can be upgraded to make this team better. Every single position that can be upgraded, should be. We need a big-bodied receiver with decent speed to round out the different types of receivers. We need a power back to run over defenders. We need a tight end that can cause receiving mismatches, and stretch the field. We need a solid backup-that-can-start for a signal caller. The offensive line needs help. The Ravens aren’t ready to contend, not as it stands today. Yes, the offense is better than it was before free agency started. But the work isn’t done – not by a long shot.

Be sure to leave your comments below – let me know who you think could fill the holes, or even where I’m misguided. All hail Purple Reign Show.

One thought on “Tempering Expectations: The 2018 Ravens Offense”